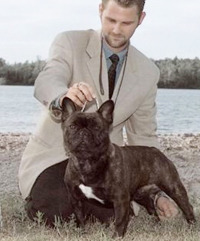 BIS/BISS/Canadian/American/BIS Bermudian Champion Justamere’s Noah At Karendon, C.D., affectionately known as Noah, is now gone from our lives but will never be forgotten. Noah was a very special man and his legacy will hopefully live on for years to come in his sons, daughters and grandchildren still to come.

Noah is the most titled French Bulldog in the history of the breed in Canada. He was truly a fine Ambassador for the breed!!

Noah obtained the final leg of his Canadian CD, one hour after winning Best in Specialty at the 2001 French Bulldog Fanciers of Canada National Specialty.
Beauty and Brains in this wonderful package!!!!