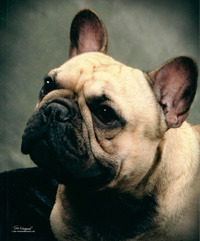 Can./Am. Ch. Karendon’s Di Magnifico, affectionately known as Enzo, is the black masked fawn son of Marcus and Charlotte. At less than one year of age, Enzo finished #4 French Bulldog in Canadia in 2008. This was a great achievement for him, given the fact that he was six months of age in June 2008 when he hit the Canadian Show Rings. Enzo received multiple Best Puppy In Show and multiple Group Placements in limited showing in 2008.

At ten months of age, he won Group I in the Group VI Specialty, at the very competitive Lower Mainland Show in Abbotsford, B.C. Canada. At 20 months of age he is now a Canadian and American Champion.